I, Tom Kemper, support these 13 reasons
we should not allow the Keystone XL tar sands oil to flow.
(I’ve borrowed much of the following background and facts of which you may or may not be aware, regarding
the Keystone XL (KXL) Pipeline from various sources. I credit those sources at the end of this article.)

Where do you stand? 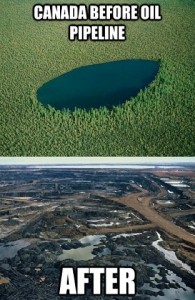 In January, President Obama, under pressure from environmental groups and a congressionally-mandated deadline, rejected TransCanada’s permit application to build the KXL pipeline, which would transport up to 1.3 million barrels of oil per day from Alberta, Canada, to the Gulf of Mexico. An existing Keystone pipeline has the capacity to transport 590,000 barrels of oil into Illinois and Oklahoma.

Already built along much of the 1,700-mile KXL‘s route, the pipeline would carry diluted bitumen — an acidic crude oil — from Canada’s Alberta tar sands to the Texas Gulf Coast.

Citing the threat to public health and how the project would hasten the climate crisis, nurses have been on the front line of protests against the KXL, a 1,700-mile pipeline that would transport an additional 830,000 barrels of toxic tar sands oil every day from Alberta to U.S. Gulf Coast refineries. Where are doctors regarding their concerns surrounding this issue?

It is projected that Canada will double its current tar sands production over the next decade to more than 1.8 million barrels a day. That rate of extraction and production will require clear-cutting some 740,000 acres of boreal forest — a natural carbon reservoir and priceless, pristine habitat.

The KXL pipeline would transport toxic tar sands — extracted from the earth below Canada’s Boreal forest — almost 2,000 miles for refining, then exporting. The President’s approval of the KXL would spur increased production of one of the dirtiest, most polluting forms of oil over the coming decades, resulting in an exponential greenhouse gas emissions increase, as well as a dramatic increase in toxins and pollutants further contaminating our air, our water, and our soils.

Tar sands oil is not only difficult, costly and energy-intensive to produce. Tar sands crude is more toxic and more corrosive than conventional oil. Leaks and spills — which will occur — threaten rivers, aquifers and communities along the planned route.

Indigenous peoples in Canada are leading the charge to stop the largest industrial violation on Mother Earth: the Tar Sands Gigaproject. Northern Alberta is the epicenter where more than twenty corporations operate in the tar sands sacrifice zone, with future tar sands development forecast. Cultural heritage, land, ecosystems and human health of First Nation communities are sacrificed for oil money, in what has been termed a ‘slow industrial genocide’. Infrastructure projects linked to the tar sands expansion, such as the KXL pipeline, threaten British Columbia’s First Nation communities as well as American Indian communities in the U.S.

The KXL pipeline is mostly built, even though the pipeline owned by, and being built by, a Canadian company, has never yet been approved by our President, who has the final say in this matter.

My wife and I have come to know Julia Trigg Crawford, a landowner forced through an unlawful form of eminent domain, to turn over her family’s land for TransCanada to build a pipeline through the Trigg Crawford farm in Paris, Texas. After fighting TransCanada’s forceful possession of her land all the way to the Texas Supreme Court, Julia was recently informed by the highest judicial body in Texas, that she must obey a foreign corporation’s demand to take her land. This type of forceful land taking has never before happened on U.S. soil. This type of court decision has never occurred either. Money, enough money flowing, changes everything.

It is common knowledge that pipelines such as the KXL leak. When they do, they spew huge amounts of toxic oil. That is what scares these landowners most. They live with a fear that none of us should have to face.

I share with you why I stand firmly against this pipeline never being allowed to transport tar sands oil.

Won’t you stand with me, and all those who are paying a huge price at the hands of this unnecessary violation of our planet and it’s occupants?

Why save for your kids education? An education won’t matter on a planet where it may not be possible for a human to live.

* the climate scientists who signed the letter to President Obama:

Credits for portions of this blog and sources from which I drew inspiration:

Tom Kemper is the founder of Dolphin Blue, a company founded in 1993 on the belief that we can all be responsible in what we use. Dolphin Blue sells the most environmentally responsible home, family, pet, office, and business products available.